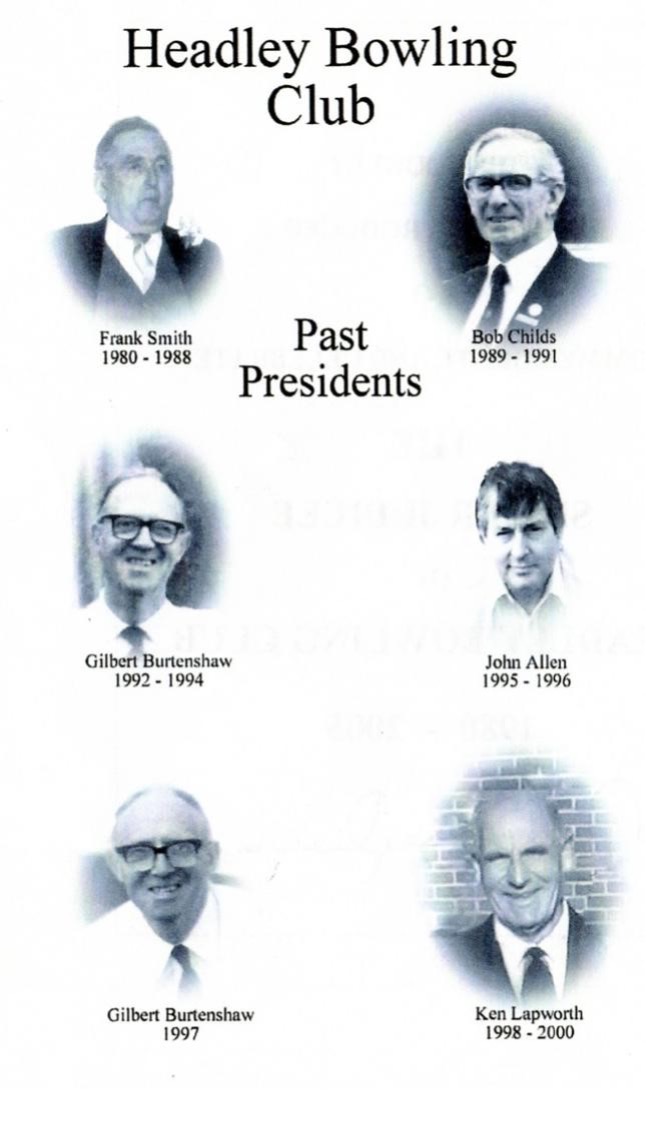 1985 proved to be very successful on and off the Green. Membership remained good and 32 friendly games were played. The high point of the year on the green came as a result of the club’s entry into the bottom section of the Three Counties league. In the first season the Division 3 title was gained in some style and with it, promotion to Division 2.

Members worked hard on the Green whilst the Parish Council carried out it’s improvements to the pavilion. So, it was a buoyant group of 52 members who gathered there for a buffet evening and prizegiving.

In the following year, 1986, enthusiasm was such that the Club formed an internal mixed triples league. The success of the initiative can be judged from the fact that it is still a fixture in our calendar! A touch of luxury was achieved with the laying of a patio using slabs purchased by members of a novel ‘buy a slab’ scheme.

Affiliation to the English Women’s Bowls Association and the Hampshire Women’s Bowls Association was approved following satisfactory inspections by the respective officials.  Using the design selected in a competition, blazer badges, ties and women’s ‘headsquares’ (?) were obtained. On the Green, things were not quite so upbeat and though again completing 32 friendlies, we were once more relegated to the Three Counties Bowls Fellowship Division 3.

Despite this set back, the club was going from strength to strength. Membership in 1987 was strong, self-help, order of the day and a full Friendly programme was being maintained. Members were not only competing in internal competitions, but were making strong showings in outside ones. The icing on the cake, was once again securing the Three Counties Bowls Fellowship Division 3 title. The shot average was the best of all leagues. Our ‘Yo-Yo’ reputation began and we were showing that on our day, as still is the case, we were a match for the best.

The year 1988 commenced with a very different battle when the Club were shocked to receive a large Rate demand for the Green. A ‘fixture’ was arranged at the Valuation Office. Represented by our Secretary and Captain we were fortunately victorious and the demand was dropped.

Members were fully involved in fund raisers, one of which, the 100 Club, is still a valuable support today. Some Members had acquired coaching qualifications and these were put to good use. The Green Committee was still working hard but the sheer magnitude of the task brought the decision to contract out the end of season maintenance, another system we still operate today.

The AGM of 1988 marked the end of an era, when due to ill health, Frank Smith stood down as President. He had been involved since 1978 when he pioneered the reinstatement of bowling in Headley.  Treasurer for the previous four years, Bob Childs was elected President.

The following year, 1989, brought an expansion of our competitive bowling with the introduction of a second team into the Three Counties Bowls Fellowship league. The teams were to be known as the Yellow and Green (no inference) teams. Unfortunately, this expansiveness spread to the Yellow team giving away shots and being relegated. However, individual members were reaching the latter stages of outside competitions and some were receiving County Recognition. It was a full house of members who gathered at the end of the season to pay tribute to Frank Smith’s work for the Club. He and his wife, Phyl, were created Honorary Life Members.

The AGM brought a further milestone when Secretary, since 1980, Gilbert Burtenshaw, stood down. Fortunately, it was not the end of his involvement within the Club. There was a feeling of busy activity all around. Members were entering, wholeheartedly, into the playing and social sides.

In 1990, an event took place that was to have a far-reaching effect on the Club. Headley Parish Council approved the formation of a Sports Association and building a new Pavilion to house all sports clubs. The council would contribute £10,000 and the association would need to raise the rest. A very generous benefactor, Mr Wheatley of Headley, offered to match each pound raised. He only asked that the Pavilion be named after his much loved, deceased wife. The first fund raising event was a supper party at his house on 7th December.

On the Green, it was a year of contrasting fortunes. Two members were awarded County Badges. Three semi-finals and an area final were reached in outside competitions, but in the Three Counties league, the yellow team were once more relegated. This time to Division 4!

Perhaps in 1991 the indignity had the effect of galvanising the team and the Yellow team achieved promotion at the first attempt. The Green team, serving its designed purpose of giving a taste of competition, achieved a respectable mid table position.

Members worked hard on the Green and surrounds and completely redecorated the pavilion, inside and out. At the same time, members were busy fund raising for the new pavilion. The end of season ‘get together’ was this time held in the Village Hall, using outside caterers. At the AGM, Bob Childs stood down and Gilbert Burtenshaw was elected President.

1992 was a year on consolidation, with much off field activity. For the first time the ladies of the Club entered the Thornbery Cup, a County two rink competition. The Yellow and Green teams, maintained their respective positions in the Three Counties Bowls Fellowship leagues. 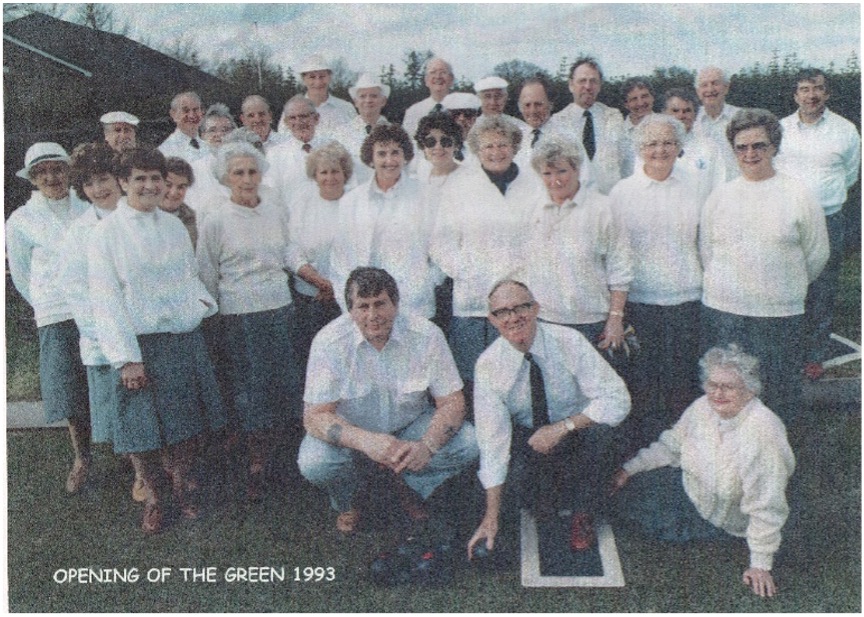 By 1993, the Club was booming. Competing in the Three Counties Bowls Fellowship with two teams; contesting three mixed Cup competitions, Hunter, Petersfield and Presidents; and one ladies team in the Thornbery Cup. In addition, members were selected for the County. In the Three Counties Bowls Fellowship Yellow team were once more promoted and would contest division 2 in 1994.

Ambitious plans were being made to provide an automatic watering system. These plans, overseen by Gilbert Burtenshaw, came to fruition in the close season and the watering system was in place in time for the opening of the Green in 1994. The year saw an all-time high in playing numbers of 71 members. In retrospect it could be seen as a little high for our four rinks. The playing year brought prestige when the club reached the final of the President’s Cup, losing by two shots in a desperately close match.

At the AGM, Gilbert Burtenshaw’s term of office ended and John Allen was elected. At the meeting the number of internal competitions was brought up to seven with the addition of a chosen pairs and an open four wood singles competition for members who had not won the championship. The trophies for these were donated by retiring members Jim and Dorothy Bailey.

The year 1995 was to prove to be the last one spent in the Club’s temporary classroom pavilion. Plans and fundraising for the new joint pavilion were gathering pace and would reach fruition later in the year. During the season, the Green, aided by use of the new watering system, began to reach the very high standard that we sometimes take for granted today. We must never forget that it is our most precious asset!

On the playing side, the teams held fourth and fifth positions in their respective leagues. The Hunter Cup provided an excellent campaign culminating with a narrow loss in the final. In the Presidents Cup, a mix up in the Semi Final dates (of which Headley was entirely innocent) resulted in the trophy being awarded elsewhere. As the season drew to a close, the big talking point was the new pavilion. £182,000 had been raised and work would proceed through 1996. There were considerable worries raised at the AGM, over storage, parking, water supplies, catering and toilet facilities. Needless to say, the resilient spirit that the Club has always demonstrated, came to the fore to overcome the difficulties. A village barn for storage; the tennis concrete hut (now our mini pavilion) for the Green equipment; a contractors Portaloo; a Porta-cabin for office; and teas held in the Church Centre. If anything, the enthusiasm was increased. Thirty-nine members turned out on Opening Day and an April car Boot Sale on the Village Green, raised £800. A donation out of this of £250 was made to the Sports Association. All these activities may have had an effect on the playing side for though the Green team held a respectable position in Division 5, the Yellow team were sadly relegated from Division 2.